First day, first historical monument of Rome to visit. I stood there, motionless and at a loss of words. All I could do was stare. Stare at the architectural beauty which had a gaze several hundred years old and an aura even older. It had sustained the eye of many – more than one could ever count and I was just one of those myriad puny humans who came from around the world to admire it. My novels had come to life and for the first time, I was physically there, walking towards the entrance, ready to seep myself in a history book, dissolving into the first chapter.

I’d walked in with a positive attitude and a refreshed mind but naturally, as always, something unpleasant was bound to happen. Yes, we had to take a tour guide. Yes, Rome was one of my dream destinations. But why am I then supposed to know everything? I had always been interested in history and picked up bits of information wherever I stumbled upon them perchance – books, television, movies…everywhere! Be that as it may, I intentionally never went on the Internet and researched about the places I’ll be visiting in detail. Why? I want to learn. I want to learn while being there in person so that I could fully feel it all and absorb it all. But just because I had always been fascinated with Roman mythology and history didn’t mean I was a walking talking Roman encyclopedia!

“What is this sculpture, Udita? Which God, which king? What is it made of? Why is it like this?”

“You have an interest in Roman history, right? Tell us, then. Why is this monument built like this? Why is its structure like this?”

“You don’t know this? And you claim to be interested? What a disgrace!”

These were just a few repetitive taunts I had the privilege to hear from my family, especially my brother. A twelve year old freak – that is what he was, and with those tangled strands – mischief was written on his face, clearly shown in that evil triumphant grin he flashed at me from time to time. Since that day in the snow in Switzerland, his behavior had completely turned around. He was like a monkey out of its cage! Annoying me had become his favourite hobby and was being mastered by him to perfection in Rome. Apparently, my interest had slowly transformed into a subject of mockery.

It was discouraging but I tried not to let it overpower me and remove the reason why I was in this city. I was here to learn and immerse myself in what I loved. No matter what my obnoxious little brother said, I saw every part of this massive Roman amphitheater, listening, reading and learning.

“Are you done roaming around this monument? It’s time to go for shopping now, ” my parents had said to me from time to time, who were unconvinced of my desire to learn – they thought I was posturing it and their indifferent attitude towards the city I adored further strengthened their belief. I sighed to my myself in disgust.

I only had two days in my grasp. Tomorrow would be the Pantheon and the Trevi Fountain. Today, I took myself to one of the most famous Piazzas – Piazza Venezia. And of course, my family had to come along, with their eyes open, buried in their phones. But I was determined to see not with the eye, but with the mind.

Tall and grand. Not massive, but grand. Pillars decorated the upper half, an evident symbol of ancient architecture. Below it were carved sculptures depicting…various scenes from battle, I believe? People filled the entire space beneath this magnificent monument, milling about like a swarm of bees, the mindless chatter getting lost amongst itself. However, the most special quality of this Piazza, which I got to learn, was what appealed to me the most – those sculptures weren’t scenes of battle. They were allegory, each with a hidden meaning, symbolizing something.The entire monument was an extended metaphor.

The blazing gleam of excitement in me could not be matched. I looked at my parents who overcome with exhaustion and heat. My little brother’s head rested in mum’s lap as she tried to calm the restlessness inside him because of the heat. Gradually, a slight smile took its place on my face and I shrugged my shoulders. I turned around and headed towards the flight of steps leading to the pale white emblem of grandeur, more ready than ever to plunge into the world of the past on my own.

Someday, I will return.

“Jackie, come up for lunch!” My mother called from the kitchen.

“Coming!” I stood up, felt my eyes go black, and found myself lying face down on the ground, my nose and mouth bleeding from the fall.

I was 13. That was the first time I felt real fear.

Hereditary heart disease ran in my family. (Unfortunately just in the women…)
Neither my grandmother nor my aunt could run without turning white in the cheeks and purple in the lips. I started experiencing piercing chest pains after gym classes in elementary school, but fainting in broad daylight struck me more than anything as a signal of imminent death. As I waited for my test results, my 13-year-old mind started imagining what it meant to be dead, what it meant to my 14-year-old boyfriend, and what it meant to my family. I wanted to attend the best high school in my city, to care for my parents at old age, and I decided that I had too much to lose. If I were only granted 4, maybe 5 decades of life at best, then I wanted to make them count.

What would you have done differently, if you knew that you might drop dead any time the next day? For me, the answer is nothing. I would still be taking notes religiously in physics classes, reading Harry Potter for the 12th time, and trash-talking about my English teacher with my boyfriend. Just like any other teenager would. Because life is worth living, however short it might be.

My test results came back: it was negative. I fainted because I was somehow malnourished from being a picky eater, and the chest pains I was experiencing were simply a result of intercostal neuralgia – something non-life threatening that goes away after a while.

That was the first time I felt so relieved to be a regular ol’ human, thankful to be alive.

(Sanjana told me to attach a fun picture to the blog post but unfortunately, the past 20 years being alive did not make me a creative person so I guess here’s a picture of me at the Horseshoe Canyon:) 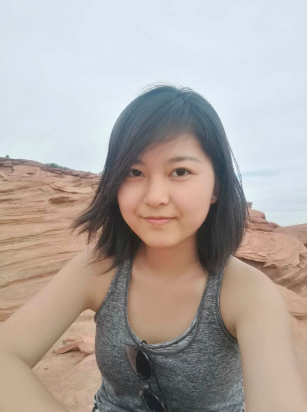 Applications for The Wellesley Review’s Executive Board are now open!

Statements of Intent are due on Friday, 14 September, at midnight, so before you go to Remix to dance the night away, send in your SOIs to thewellesleyreview@gmail.com.

Tell me which one sounds most promising in the comments and maybe I’ll complete it in time for next semester’s blog post!

Every Sunday, one reviewer will post something for you to read – anything from a fragmented personal poem to a recipe from home, from a discourse on where to find the best tasting water on campus to an op-ed on Graham Central Station and whether it’s really that great (I have doubts).

(If you want to share your incomplete, ridiculous, funny, weird, amazing thoughts with us and other Reviewers, SUBMIT to us at thewellesleyreview@gmail.com!)

We will also have regular updates about everything that is going on this semester – stickers, Org Fair, Open Meeting, E-Board applications, events, and so much more!

With great excitement,
The Wellesley Review

We have very exciting news today. After a summer in the works, we are finally making our The Wellesley Review stickers available!

Check out these beautiful designs by Juna Lee ’21, one of our Publicity Chairs, and Sanjana Thakur ’20, one of our Editors-in-Chief! 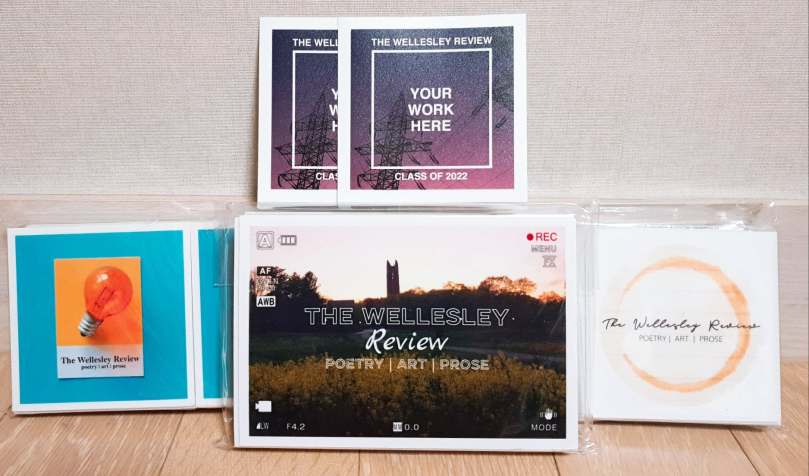 We will be selling all of these beautiful stickers at Org Fair and at our Open Meeting, but we have very limited quantities available so you should support your only campus literary magazine and pre-order them now! (Plus, they’re cheaper if you pre-order!)

Welcome to the new and improved The Wellesley Review!

All summer, our E-Board has worked hard to provide you with a more user-friendly, enjoyable experience. The pages have been redesigned, the blog posts reconceived, and  the site restructured.

Stickers:
We have stickers, everyone!! Click HERE to check them out.
We have very limited quantities of each sticker, so order HERE if you are a current student/faculty member on-campus or HERE if you are off-campus and want the stickers sent to you!

Increased Campus Interaction:
In order to facilitate and be a part of more on-campus conversations, we have created two new E-Board positions titled Community Chairs! They will organise lectures, events, and the biannual The Wellesley Review Release Party.
(Pssst! If that sounds like fun to you, keep an eye out for application information!)

Increased Social Media Presence:
In order to increase our engagement with social media and our supporters, we have decided to have two Publicity Chairs rather than one. The Publicity Chairs will post regular updates to our Facebook page and Instagram. Additionally, beginning in Fall 2018, our E-Board members will post one blog update to this website every Sunday.

Junior Positions:
We want to encourage all Wellesley students to feel comfortable trying new things, and so we are introducing two new positions – Junior Layout Editor and Junior Treasurer!
Students in these positions will have the opportunity to learn amazing new skills from trained, experienced Layout Editors and Treasurers so they can feel confident applying for Senior positions layer!

NaPoWriMo:
Starting in Spring 2019, we will be posting all NaPoWriMo blog posts to this main website under the tag ‘NaPoWriMo’ instead of to our peripheral NaPoWriMo site, which will stay up as an archive.

Please contact us at thewellesleyreview@gmail.com with all your questions, comments, and suggestions.

As always, thank you all so much for your love and support!